MR Will Be Everywhere In 10 Years 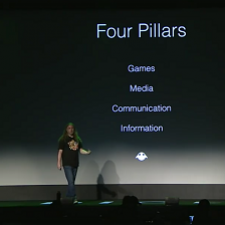 When Graeme Devine, the Chief Game Wizard at Magic Leap, took to the stage at DICE Summit 2017 he declared that, “The only reason to give a speech is to change the world”. Brave words for a company that has yet to go public with its product…

But just like Facebook CEO, Mark Zuckerberg, has suggested for VR,  Devine is looking at a 10-year plan for MR. He set out that MR will begin to take over and replace tablets and smartphones in five years and it, ‘Will be everywhere’ in 10 years. Devine likens the rise of MR to that of the smartphone over a decade, from enthusiast interest to ubiquity. Of MR, he says, “We’ll have theatre screens which will be awesome, but we have to make that 10-year journey to get there.”

In his presentation, Devine set out what he called the Four Pillars of content that MR must address:

Games are right at the top of the list for Devine, not only because he’s worked in the industry for decades, but because he sees videogames designers, developers and practitioners as the only people equipped with the skills to create MR across all the other pillars too. As he says, “In the games industry, we’re the only ones that can do this. The only industry that makes computer software that actually interacts with you constantly is games.”

Devine explained that games design hasn’t really moved on since gaming went 3D in the mid-90s with games like Super Mario 64. He said, “The world is still on the other side of a piece of glass.” Which is what makes Magic Leap different; “Now the games happen on our side of the glass and in our homes. We’re doing things in the real world… these are not possible on console, laptop or iPad.”

He later expanded on this saying, “MR has to be perceived as different as television is from radio; as radio is from a newspaper. Not an add-on to mobile, computer or console.”

Explaining the unique kind of experience that MR can offer, Devine described the concept for Ghost Girl. The user will hear noises and see lights from the next room of their house. When they look, they will see Alice, the ghost of a girl, who will look them right in the eye – which is only possible because the system knows where the user is looking. She can point over the user’s shoulder, while the player uses real world objects such as wooden blocks or Christmas tree lights – no, really – to interact with her.

MR In The Moment

Although Devine led with games, he also suggested ways that MR could affect our lives in other areas – across the three remaining pillars. In one example, he singled out smartphone culture at public events, where everyone is more concerned with filming than being there. He said, “You’ve got to be present in those moments. Watching a two-dimensional image recorded is not being present.” He went on to say, “If I could do one thing with MR it would be to return presence to the world.”

It sounds like the Wizard found a reason to make his speech after all...