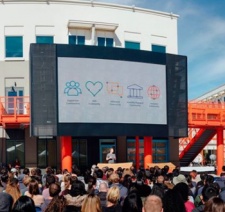 In a lengthy message to the Facebook audience titled Building Global Community, Mark Zuckerberg outlined his thoughts on the kind of world he wants to help build. In the course of the nearly 6,000 word statement, the Facebook CEO touches on communities, infrastructure, artificial intelligence, being inclusive and civil engagement.

He begins by asking, “Are we building the world we all want?” Before going on to say that, “In times like these, the most important thing we at Facebook can do is develop the social infrastructure to give people the power to build a global community that works for all of us.”

It seems that Zuckerberg plans to build on Facebook’s social connections platform to, well, connect the world. “For the past decade, Facebook has focused on connecting friends and families. With that foundation, our next focus will be developing the social infrastructure for community -- for supporting us, for keeping us safe, for informing us, for civic engagement, and for inclusion of all.”

The message makes clear his conviction that Facebook can be the vehicle for this change, observing that, “Just as TV became the primary medium for civic communication in the 1960s, social media is becoming this in the 21st century.”

It seems like Zuckerberg is all about the long view. After recently reminding naysayers that VR should be seen as a long-term investment, towards the end of yesterday’s message he says, “There are many of us who stand for bringing people together and connecting the world. I hope we have the focus to take the long view and build the new social infrastructure to create the world we want for generations to come.”