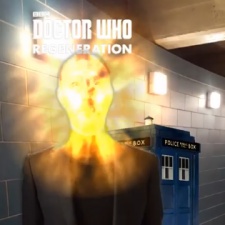 The Lens surrounds the user in a distinct golden glow, an effect that has been an iconic feature of each Doctor’s Regeneration since the BBC series began in 1963. Created by VFX studio, The Mill – the minds behind Skyrim’s VR cinematic trailer for TV, and the recent John Lewis advert featuring Moz The Monster – the Lens uses expert special effects in partnership with AR tech to bring to life the feeling of becoming the new Doctor.

The Lens can be accessed via Facebook Camera Effects on the Facebook app before tonight's Doctor Who Christmas Special.