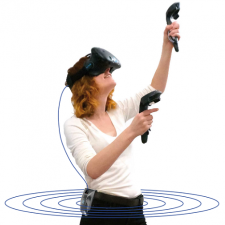 What makes it different than the others though, is the fact that the receiver is belt mounted as oppose to being attached to the HMD itself. Users plug the cables that would normally connect to the PC into KwikVR’s ports, put on the belt; compressed video is then transmitted to the unit, and finally to the HMD via HDMI, resulting in a wireless VR experience.

The first concern around wireless VR solutions is often latency, but Scalable Graphics should ensure that KwikVR will remain under 12ms latency. As it only weighs around a pound and offers up to four hours of gaming on the battery, the device’s impact on play sessions should be negligible, aside from the benefit of making it wireless.