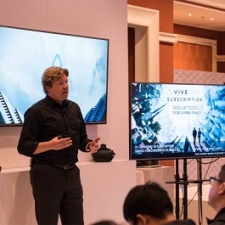 Viveport, HTC’s global VR app store, today announced at Consumer Electronics Show 2017 that it is introducing the first-ever app subscription service for VR content, which will launch early this year. The new service is designed to help customers navigate the growing market for VR apps and introduce a new channel through which VR developers can monetise content. Subscribers will pay a monthly fee, with which they can access Viveport VR content. VR content creators can opt-in to include products in the subscription service, as well as continue to distribute their apps as standalone titles.

“We’re happy to let VR fans know that the same way they discover and consume content through popular subscription services for music, films, TV and games is coming to Virtual Reality,” said Rikar Steiber, President of Viveport. “For developers, this is yet another opportunity for them to reach broader audiences - we want to give VR developers as many ways as possible to monetise and feature their content.”

Viveport also announced that it’s expanding services for enterprise VR customers and arcade operators by launching dedicated VR app stores for professionals. The Viveport Arcade platform is designed for location-based entertainment centres to introduce VR to the masses. Steiber outlined plans for Viveport Arcade saying, “We now have more than 300 top VR titles on our arcade platform. In a short time, we’ve partnered with operators in China where we’re now in more than 1,000 locations, and we expect that number to grow to more than 5,000 locations globally by the end of the year.”

Viveport’s dedicated enterprise app store will target a different set of customers. As some of the biggest industrial sectors are adopting VR - such as healthcare, engineering, real estate and retail - the enterprise store will host content for enterprise customers and support VR developers creating apps and tools for professional industries.

HTC is encouraging developers interested in learning more about the upcoming Viveport subscription and the Viveport Arcade platform to visit here.