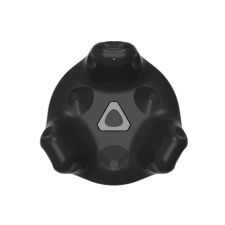 HTC has unveiled its brand new Vive Tracker at the Consumer Electronics Show in Las Vegas. The new hardware will offer new options for developers to make VR even more immersive with additional tracking capabilities and new peripherals. The Vive Tracker enables motion tracking for entirely new form factors to be trackable within the VR world, and is the foundation for building a new accessories ecosystem for Vive.

At CES, Vive  demonstrated eight integrations that showcase the future of VR applications.  Most importantly, the Vive Tracker will integrate with any number of future VR accessories via a simple connection, ensuring developers and consumers will have a single accessory to unlock thousands of new experiences. The Tracker weighs 85g and is 99.65mm (Diameter) x 42.27mm (Height).

“To foster the long-term growth of VR, we want to make it even easier for developers to prototype and market more immersive controllers and accessories,” said Daniel O’Brien, GM, US and EMEA, Vive. “The Vive Tracker is the first step in growing an ecosystem of third-party accessories that will change how we interact with virtual experiences and provide consumers and businesses with an unlimited amount of content opportunities.”

Vive showcased a variety of Tracker-enabled accessories at CES, including the first VR camera, multiple rifles built for VR shooters, haptic gloves for VR, and even training applications for Major League Baseball players and professional firefighters.

One of the first developers to work with the new hardware is Dr James Mullins from Deakin University, Australia, creator of FLAIM trainer who said, “We were able to integrate the Vive Tracker into our fire fighting simulator within four hours. For us, the Vive Tracker eliminates both hard material costs to integrate tracking sensors, but also saves critical development time. Now, we can bring products with full motion control much more quickly to market."

The product will ship in the second quarter of 2017, with pricing announced at a later date. HTC has announced that it is to supply up to 1,000 Trackers to developers free of charge ahead of its release to the general public. We’ll let you know how to apply for yours when the information is available.