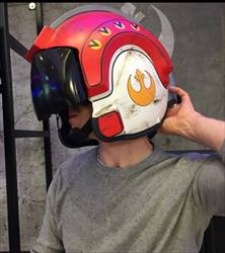 Starting today to celebrate the upcoming release of Rogue One: A Star Wars Story, fans who go to ODEON Cinemas around the UK will have the opportunity to explore the Star Wars galaxy in Virtual Reality as an X-Wing fighter pilot.

Working with leading cinema technology company RealD and ILMxLab, Walt Disney Studios have created an industry-first experience that will be travelling to three ODEON cinemas in the UK. The experience gives fans the opportunity to immerse themselves in a 360 immersive VR preview of Rogue One: A Star Wars Story, before it lands in UK cinemas on Dec 15.

Each location has two highly detailed and bespoke X-Wing fighter pilot helmets, close replicas of those in the film that also incorporate the latest VR tech. Budding pilots have a choice to make; Red Squadron or Blue Squadron.

Users will enter a VR world, where they can watch the trailer in 3D or experience ‘Rogue One: Recon’, a fully immersive 360 experience created by ILMxLAB that builds directly into the storyline of the new film. It puts users in the cockpit of an X-Wing, but what starts as a routine mission takes a sharp turn as you stumble upon unexpected Imperial presence - and something they will do anything to keep hidden.

Audiences will be able to take part at the following locations: