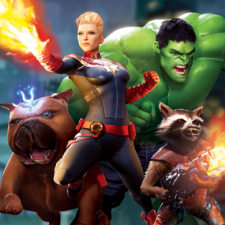 Oculus is teaming up with Marvel for Rift exclusive multiplayer VR title, MARVEL Powers United VR. The game is being developed by Sanzaru, whose VR games include VR Sports Challenge and Ripcoil. We previously included the company in our 25 Developers To Watch feature.

Announced at Disney’s D23 Expo in California, the Oculus Studios game is a multiplayer co-op title for up to four players. Powers United will have full locomotion, with smart comfort options. The full release will feature more than a dozen playable Marvel characters, including Hulk, Rocket Raccoon, and Captain Marvel.

If you’re at the San Diego Comic-Con, head down to the Marvel booth to get hands-on.

MARVEL Powers United VR will be released for Oculus Rift next year.