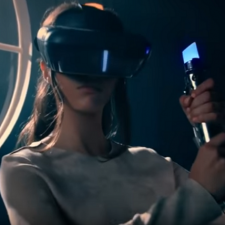 Disney is partnering with Lenovo and Lucasfilm to release a smartphone powered consumer AR headset. The set-up sounds similar to Samsung’s Gear VR, with content downloaded to a smartphone that locks into the headset. The difference is that this is AR – not VR – so the outside world is still fully visible.

The company announced its first game for the hardware will be Star Wars: Jedi Challenges, at the D23 Expo in California. There will also be an AR version of holochess, as seen onboard the Millennium Falcon in Episode IV.

You briefly see the headset and controller hardware in the teaser trailer below. We don’t know if the lightsaber is representative of the physical interface – we’d guess so, as the ‘lipstick’ clearly lights up – but if it is, that’s enough reason for us to buy one...

Disney has yet to set a release date, but the website says ‘Coming soon to Best Buy and Lenovo.com’.