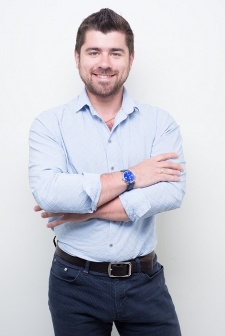 Ilya Flaks founded Fibrum in 2013 to produce its Pro-VR mobile headset, but from last year, the Moscow-based company has focused on the accompanying content app, Desirium.

We spoke to the CEO, and his Business Development Director, Alexander Erdyakov, to find out more about their ambitions to bring emotions to people in VR that they may be lacking in everyday life through a range of short VR experiences.

TheVirtualReport.biz: Can you give us a little bit of background on Fibrum; when did you start working in the VR space?

Fibrum: The story of the company began in 2013, when Ilya Flaks assembled a team to implement the idea of Virtual Reality available for all. He presented the first Fibrum Pro VR-headset in 2014.

Within two years, the line of products had expanded significantly. Fibrum had released dozens of VR apps, created the Fibrum Platform and developed the first Russian VR shooter, The Raid.

The company is also producing AR greeting cards and coloring book. There are about 30 successful business projects in collaboration with such organisations as Moscow Government, Ministry of Culture and Yandex Taxi.

The main philosophy is giving people vivid emotions and diverse content in a single application.

What prompted the switch to software only last year?

The fall of the national currency almost doubled the cost of Fibrum Pro headset and in this context, it has become quite difficult to compete with cheaper Chinese VR headsets. Our software became quite popular and it was an intuitive decision to shift the company’s focus to it.

Tell us about Desirium. What's your philosophy for this platform?

The main philosophy is giving people vivid emotions and diverse content in a single application. Basically, Desirium is a mobile Virtual Reality application, allowing every user to choose what particular emotion he or she wants. There is no need to take the VR headset off as the user switches the experiences inside the app.

Desirium works with any kind of mobile VR headset. We are working on making the app available for all existing VR platforms including PCs and consoles.

We can make things that have never been done before and it is really exciting to discover this whole new world of opportunities.

Why is VR particularly well suited to sharing emotions and experiences?

New VR technology allows us to make the experiences more immersive and credible. Giving a player a possibility to look around is a huge step forward in designing visual experiences. We can make things that have never been done before and it is really exciting to discover this whole new world of opportunities.

What experiences do you already have available?

Currently it’s work in progress and we would like to keep all the experiences secret. However, we can surely say that even at the initial stages, users will have a selection of memorable experiences – from a night in a haunted cabin to a dogfight in an open space.

How many users are already enjoying these experiences?

Currently, Desirium is available only to our developers. Sometimes we show some of the experiences at different expos and conferences to see people’s reaction, but to enjoy the app fully, people will have to wait until its official release.

What's your business model - do people pay for each separate experience, or do they subscribe, or some other method?

The app will be available for free at App Store and Google Play, as well as internal stores for Gear VR, Oculus Go and Google Daydream.

Initially, user gets a certain amount of DesCoins (in-app tokens) that can be spent on purchasing new experiences one at a time. Once a user runs out of DesCoins, he can either purchase them or watch some ads inside the app.

Desirium was made with other developers in mind. The app is a platform for high-quality VR content.

If another developer wants to supply an experience to go on your Desirium platform, how do they go about doing that and what would be your financial relationship with them?

Desirium was made with other developers in mind. The app is a platform for high-quality VR content and if someone would want to have their experience present in Desirium, we will see if it fits Desirium standards and if it does, we will gladly add it to the app.

We’re planning to work on a revenue-sharing basis. A developer will get a bigger part of the profit. Basically, it’s the good old developer-publisher relationship.

You’re taking Desirium to various trade shows and conventions at the moment. What’s the response been like?

At DevGAMM we offered people who have tried Desirium to share their opinion on it in a special form. Even though we took a lot of those forms, we ran out of them on the very first day. People get really excited, they suggest new experiences, new plot twists etc. It’s always very flattering and means a lot to us.

What's next for Fibrum and Desirium? What's your ambition for the next 12 months?

The next couple of months will be dedicated to building the app and presenting it at CES in January. After CES, we will work on adding it to App Store and Google Play.

Second quarter of 2018 will also be a busy season, as there will be numerous releases of all-in-one devices. Needless to say, we want to have Desirium for each of those devices. Q3 of 2018 will probably be fully dedicated to adapting Desirium to PC VR.