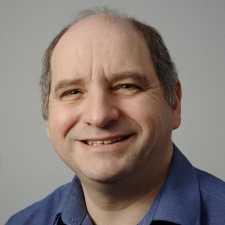 Games industry legend, Andrew Oliver, has been at the forefront of new games technology for decades. Starting alongside brother, Philip, as the ‘80s schoolboy games programmers that went on to create the 8-bit Dizzy franchise, he continued to do pioneering work on Wii, Kinect and 3D gaming.

Now Technical Director and Co-Founder at Radiant Worlds, you might reasonably expect to find Andrew once more blazing trails; this time in VR. But, for now, the British veteran is keeping a watchful eye on the format from the outside. We found the thinking behind this decision interesting when we spoke to Andrew at a recent event - and thought you might, too...

As a successful technology director of a games company and programmer of many successful games back in the 80s and 90s, I’ve always taken a keen interest in new technology - especially when it’s in the games space. I was blown away by the arcade game, Battlezone, in 1980 when I was 13; it was an amazing glimpse of 3D video gaming.

I’ve bought every console on the day of launch and pretty much every peripheral. I love being on the cutting edge and getting to the future before other people! It’s always a fun challenge to make a game on new technology. With a reputation for being ahead of the curve, I’m often asked if and when we’ll be jumping in and developing for VR. Here’s my answer.

These were the cool new toys, but it’s amazing how quickly they died - along with contracts to write games for them.

While I was Technology Director at Blitz Games, we always strove to make games for hardware launch windows. Fuzion Frenzy was the first game mastered on Xbox - it was in the shops a week before the console - while SpongeBob Squarepants: Creature from the Krusty Krab, was the first third party game launched on day one of the Wii.

We always embraced new peripherals too. The Biggest Loser used the Wii Balance Board, before becoming a launch game for Kinect too. We got the reputation as the ‘go-to guys’ for both devices. We then went on to produce another 12 Kinect games including the AR game, Fantastic Pets. With the Karaoke Revolution series we used Microphones, and with Yoostar, we used the PlayStation’s EyeToy and Xbox Camera to superimpose players in real-time into famous movie clips.

These were the cool new toys, but it’s amazing how quickly they died - along with contracts to write games for them.

Early adopters were badly burnt and probably felt they’d been oversold on the dream. 3D TV has failed in the eyes of the mass market, despite the mature technology now working brilliantly.

With Pixar’s Toy Story in 1996, for the first time, computer graphic imagery wasn't just being used as a special effect. Then in 2004, Polar Express 3D almost perfectly convinced me there was an exciting future in stereo 3D and I took a very keen technical interest in how it worked and how we could do this in real-time games.

So I met with Samsung, LG, Sony, Philips, RealD and Dolby, as well as with filmmakers at places like Disney, DreamWorks and Sony, to discuss the technicalities of this new technology. Using prototype 3D TVs, we created a 3D TV demo working on both PS3 and Xbox 360 in 2008. There were many technical hurdles to overcome, but I feel this helped lead the way to Sony creating one standard that was then incorporated into PS3 and beyond.

I bought an early 3DTV, but we had to watch movies with all the lights off to avoid flicker, the ‘shutter’ glasses were awkward and heavy and most of the 3D Blu-Rays in the first year were technically really poorly made. Early adopters were badly burnt and probably felt they’d been oversold on the dream.

Since then, we’ve seen big-screen OLED passive 3D TVs that make blockbusters look better than in the cinema. But they’re no longer in production and 3D TV has failed in the eyes of the mass market, despite the mature technology now working brilliantly.

VR and AR do not have an inevitable future. The teething problems should be kept away from the mass market.

I look at VR and AR differently than other people. I used to jump on every new console and peripheral; every new technology. But VR and AR do not have an inevitable future.

Like many of you, I’ve seen most of the VR demos and played a lot of the games - and we’ve all seen moments of brilliance mixed with moments of nausea. Now, it’s new technology and it’s understandable that it has teething problems, but I believe these teething problems should be kept away from the mass market. VR has lots of issues, both software and hardware, that need to be ironed out through development and iteration.

These problems are proving harder to solve than most people expected or hoped. Here we are, over five years after the massively successful Kickstarter campaign for Oculus Rift and three years after Facebook’s $2bn purchase, but we still don’t have a mass market offering.

It turns out that we need computers that can process at least 90fps, at 1080p resolution per eye, and extremely high precision position tracking with near zero latency; pretty difficult to achieve even on the fastest computers.

Then we need a comfortable headset that houses two state-of-the-art screens, blocks out all light and can be adjusted for all viewers, including those with glasses. And it needs to be a reasonable price and not make your face sweat as soon as you put it on!

Nobody wants wires, but wireless solutions add latency and heavy batteries. Putting the computing power into the headset, as with mobile phones, makes it heavier and hotter, with compromises on quality and performance.

All of the above gets more easily solved if the audience is huge and more investment can be put into driving costs down and performance up, but whilst the current experiences continue to have issues, the mass market aren’t attracted by the offerings. It’s a horrible catch-22.

Mixed Reality AR, with the ability for players to instantly look beyond the visuals at the real world with forward facing cameras, is a must.

Then we come to the software. We’re attempting to fool the brain into making players feel they are in a virtual world, but the human brain is pretty good at working out when things aren't quite right. If we try to make things look realistic, it really has to look realistic to avoid the ‘uncanny valley’.

Whilst there are techniques for sophisticated lighting, physics etc to make all this work, it struggles to do this with the fidelity that VR demands. Some developers have chosen to avoid the uncanny valley issue by using stylised graphics that our brains are more comfortable accepting and the new VR Battlezone is a great example of this.

The other main issue is movement. We want to transport people to other virtual worlds, but then the player wants to move within them. Whilst we can move a player through a virtual space easily, they are not actually moving through a real world space and their brain knows the difference and it tells you that something is wrong - the only way it can - by making you feel nauseous. Even when put into a driving seat moving through a virtual world, the brain knows you aren’t really travelling, especially on the corners.

Another impediment for adoption by casual consumers is the nervousness created by being blinkered from the real world. You may be getting amazing visuals of this virtual world, but you have no idea of your real surroundings, those around you, with a feeling of isolation. Mixed Reality AR, with the ability for players to instantly look beyond the visuals at the real world with forward facing cameras, is a must in my opinion. Ripping off the goggles is not the solution.

As problems are resolved over time, convincing the collective masses to change their views on VR becomes a much harder challenge.

Everyone in the VR industry - hardware and software - is doing an amazing job. As a technology director who understands the issues, I can see this. I’ve bought all the VR kits and love playing them. Like all those who have experienced moments of brilliance in VR, I’ve been really impressed by the technology and some of the demos have been incredible, but I’m still seeing lots of issue. Mostly they’re issues that I can live with, but there are still too many times I feel nausea and we can’t expect casual consumers to adopt this.

Lessons are being learnt and things are being improved. But whilst we all want these headsets to go mass market, we must be careful what we wish for. At this point, I feel the audience may feel they’ve been oversold the dream and will decide, that whilst it’s sometimes great, VR comes with too many compromises and issues. Then as problems are resolved over time, convincing the collective masses to change their views on VR becomes a much harder challenge, just like 3DTV before it.

I’m a big believer in VR; I think it has an incredible future - I certainly hope it does. While the VR industry wants to get out to the mass market ASAP, I feel we’re not quite there yet. I’m very excited to hear about the Oculus Go, Vive Focus and Lenovo/Google Daydream standalone headsets, but I’ve seen other incredible technologies that I still believe in to this day just die...

Andrew Oliver is passionate about new technology and its potential for creating more immersive and engaging games for a global industry and a wide audience. Along with his brother, he established Blitz Games Studios in 1990, where he guided the company in all technical aspects.

Andrew created the company’s original 3D console engine and over the years has guided the development of systems and procedures for multiple teams, working across multiple platforms. He is now responsible for the technical side of Radiant Worlds and was awarded an Honorary Doctorate of Technology from Coventry University in 2008.