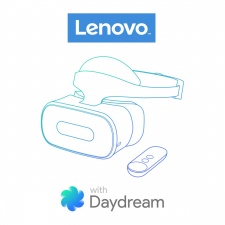 As we reported earlier today, Vive unveiled its standalone VR headset at yesterday’s Vive Developer Conference 2017 (VDC2017) in Beijing, China. The Vive Focus has been designed to appeal to a mass market with convenience and affordability to the fore. HTC said, "This type of device will certainly appeal to a much larger group of consumers.”

That large group of consumers will be entirely in the Asian market, however, as HTC has cancelled its plans to bring a Google Daydream version of the hardware to the West. Announced at Google I/O 17, HTC now tells us, “We still have a great relationship with Google, but will not be bringing a standalone device to the western markets on Daydream.”

All is not lost though as they added, “We’re looking closely at our hardware roadmap, and will share when there is more to come for Western users next year.” We expect the Focus to be released globally and branded as a Vive product in 2018.

Google’s VP of VR and AR, Clay Bavor, confirmed on Twitter that there will be, “No Daydream standalone from HTC”.

The standalone announcement at May's I/O 17 also mentioned a hardware partnership with Lenovo that is still progressing. In a follow-up Tweet Bavor said, “Have been using and loving my pre-release @Lenovo standalone headset”. Lenovo’s standalone Daydream headset is expected to launch this year.