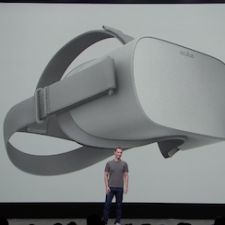 Zuckerberg introduced the standalone hardware saying, “Mobile is affordable, but less powerful than PC VR. We have to find the sweet spot in the middle of affordability and quality”.

The Oculus Go will be aimed exactly at that sweet-spot between mobile and tethered VR when it launches at $199 early next year.

In his presentation later that same event, Hugo Barra, VP VR, explained that the company’s expansion into standalone VR is intended to bring more people into VR.

He shared some information on the Go’s specs, referring to it as a ‘Full mobile computer’ that’s ‘super’ lightweight, with soft straps and new breathable mesh fabrics and foam.

Facebook has designed the Oculus Go to be, “A leap in comfort and visual clarity”, with Barra claiming it to offer the, “Best visual clarity of any VR device”, thanks to its next generation VR optics. New lenses will offer the same FoV, but less glare, while the display is Fast Switch LCD. With specs at WQHD 2560x1440, Barra said that the technology offers a higher pixel fill factor than OLED and helps to reduce the screen door effect.

As well as 3DoF, the Go will also feature integrated spatial audio – small speakers – so there’s no need for additional headphones. The hardware interface is via an orientation-tracked single controller, much like the Gear VR.

And that’s not the only crossover with the Samsung hardware; both Gear VR and Go can run the same apps from day one, giving the all-new standalone hardware a massive library of more than 1,000 apps and experiences from day one. This binary compatibility is true of all apps developed in Unity, Unreal or the Oculus Mobile SDK.

Dev kits will ship to developers in November. Find out more here or apply for early access via the Oculus Hardware Request Form.