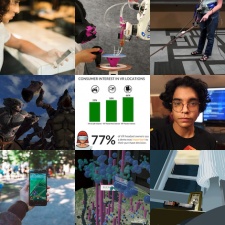 Maxime Coutté took up the project because his interest in VR was piqued by the anime series, Sword Art Online.

2) The Transformation Of Retail Shopping With Augmented Reality

The SDK makes it easy for developers to take advantage of modern AI techniques through a set of cloud-based services.

4) VR Arcades Are Hot Trend, But Consumers Want So Much More

Facebook’s VR app Quill is getting a major update with animation tools that can bring hand-made creations to life.

6) Why Augmented Reality Will Be Your Next Customer Channel

CMS Wire finds our future digital interactions are destined to be augmented.

8) We Entered the World of Brandon Sanderson’s Stormlight Archives

Microsoft recently developed a haptic controller for VR with an unusual target audience in mind: the visually impaired.