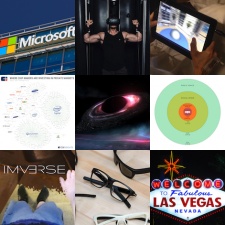 Nine XR stories from around the web that caught our eyes here at TheVirtualReport.biz:

1) Where Major Chip Companies Are Investing In AI, AR/VR, And IoT

The private market bets made by major computer chip companies, including GPU makers.

2) A VR Movie Set In Space Just Landed A 7-figure Deal At Sundance.

CityLights is acquiring Spheres—a three-part series that lets viewers explore the depths of space in VR.

Verge’s exclusive first look at Vaunt, which uses retinal projection to put a display in your eyeball

Microsoft is said to be creating a new Mixed Reality Studio and bringing together a number of its AR/VR/MR assets into a new organisation.

What if you could look down and see your actual arms and legs inside VR, or look at other real-world people or objects as if you weren’t wearing a headset?

How to move away from the wireframed box and into the infinite space of AR.

7) Location-Based VR Can Fill A Void In Las Vegas

David Bolton on CES, VR Adventures and The Void and why the table stakes for location-based VR couldn’t be higher.

Forbes on the first Black Box VR gym, set to open in San Francisco this year.

9) Virtual Reality Helps Explore The GPS Of The Mind

The University of Texas at Austen Neuroscientist uses Virtual Reality to study how the brain orients us in space.