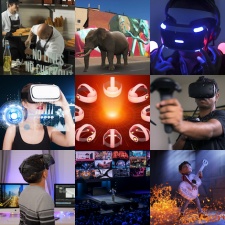 Engadget asks, ‘When the dust settles, what will our headsets look like?’

Venturebeat interviewed four VR and AR entrepreneurs who explain why mixed reality analytics is a rapidly emerging Software as a Service (SaaS) opportunity.

Unity Technologies takes a look back at the highlights from last year’s live events.

9TO5Mac visits Apple in New York for a demonstration of the update.

5) How To Build Audio For VR Games

The Washington Post speaks to Oculus and Pixar about the Coco VR experience.

7) Augmented Reality And Mixed Reality In Aid of Conservation

Scientific American writes that beyond gaming, XR is also being used to protect wildlife.

Russian news agency, TASS, reports that a man tripped and crashed into a glass table while moving around the apartment in Virtual Reality glasses

9) How Augmented And Virtual Reality Will Reshape The Food Industry

Professional chef, Jenny Dorsey, looks at the future of food for Techcrunch.