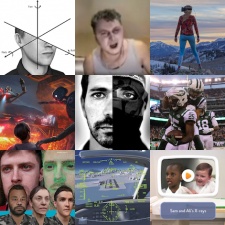 Greenlight insights on LBE from the IAAPA expo and building an $8bn industry in five years.

2) Star Wars: Secrets of the Empire - ILMxLAB And The VOID - Immersive Entertainment Experience

A trailer for the LBE VR experience in the week The Last Jedi is released because Star Wars.

AR tools for pilots have become less of a “when” and more of a “how.”

SportsTechie looks at a future where your phone is a controller for live sports events.

5) The Royal Australian Navy Are Giving VR-powered Diversity And Inclusion Training A Go!

An interview with Equal Reality, a group focused on reducing unconscious bias through Virtual Reality.

6) A Public Database Of Immersive VR Videos With Corresponding Ratings Of Arousal, Valence, And Correlations Between Head Movements And Self Report Measures

A pioneering photojournalist hopes VR can restore war photography’s dramatic power to influence and inform us.

The BBC on how Virtual Reality is being used to help adoptive parents to understand the traumatic past of their child.