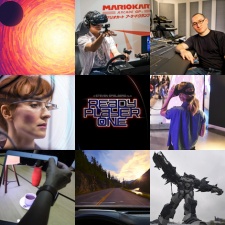 1) Before Vs After: Marketing With Virtual Reality

Eight case studies to convince potential clients that VR is effective, including Volvo and Marriot.

PostAR CEO and founder, Michael Park, says that AR will create the next generation of the internet, a 3D spatial medium in which we’ll physically live, work, and interact.

Six months in the making, 100-page eBook, VR Prelude, could be a useful boot camp for potential clients or new hires.

Mix magazine speaks to The Atlanta-based producer and sound designer about the future of sound in VR.

6) Can Virtual Reality Bring Back the Arcade?

Slate considers VR ‘a novelty’ right now, but that may change.

7) The Reality Of Virtual Reality In 'Ready Player One'

Former Disney and AOL executive, Charlie Fink, looks at how fiction measures up to the facts.

9) How Augmented Reality Is Transforming Work

PC Magazine looks at the factory floors where Augmented Reality smart glasses can make a huge difference in speed and efficiency.