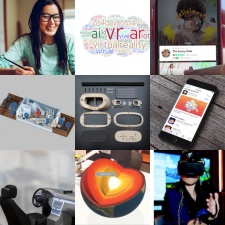 2) How I Have Become A Virtual Reality Influencer …And You Can, Too

TonyVT SkarredGhost shares how he reached #34 on a top 100 VR influencers list.

Edtech magazine reports on a study that finds VR will spark innovation.

5) Why Snapchat Might Just Win The Augmented Reality Wars

The Week reasons that if a picture speaks a thousand words, then an image based social network is poised to capitalise on AR.

Futurism explores how AR is being implemented to foster creativity and collaboration in the automotive sector.

Researchers at the University of Southern California are examining how virtual reality could promote brain plasticity and recovery.

Why buy a branded VR headset when you can print your own?

Week That Was: 13th October

Week That Was: 6th October