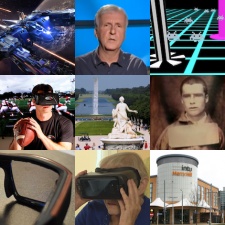 2) James Cameron says if he wasn’t making the Avatar films, he would be experimenting with VR

BB is teaming up with AR powerhouse Vuzix.

The 49ers are one of six NFL teams that use STRIVR Labs as an aide in training players via VR.

Intu is set to roll out a trial paid-for VR experience across its three of its shopping centres, allowing shoppers to interact with characters from The Emoji Movie.

The age of talking labels is officially here! No longer do we walk into a wine store and simply pick up a bottle of red, pay and walk out.

7) Beyond Virtual Reality: Synthetic Reality And Our Co-Created Futures

American academic ‘proposes’ another acronym for us to argue about: SR.

Scientists have devised a virtual reality platform for lab animals.