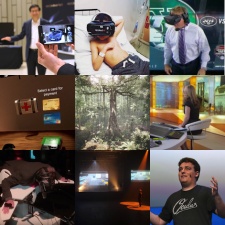 Engadget says the second Google Tango phone is the first one worth owning.

Palmer Luckey opens up in interview with Japan’s MoguraVR.

SoftBank’s recent acquisition of a $4 billion stake in NVIDIA would make it the fourth-largest shareholder.

4) Is VR The Future of Filmmaking?

Alice Bonasio takes time off from celeb spotting on the red carpet at Cannes to find out more about the future of film.

Mallory Locklear is less than excited at the prospect of virtual credit cards.

The founder of the LUMO Labs accelerator program shares some works in progress with VR Scout.

7) For A Child Getting Chemo, Virtual Reality Games At Hospital Can Feel Like Disney

The Miami Herald finds out that VR can help, “To distract you from a miserable situation and you feel better – absolutely”.

8) Virtual Reality Bursts Through The Movie Screen At Sundance

PBS News Hour visits Utah’s Sundance Film Festival to witness how filmmakers are beginning to use the burgeoning technology.

[a]list talks about the VR performance training platform, as used by NFL teams.