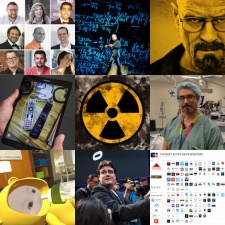 2) Virtual Reality - The Future Of Media Or Just A Passing Trend?

Forbes Agency Council members talk about whether they see VR as just a trend or as the future of advertising and media.

Are VR devs hibernating until the consumer market wakes up?

CNet finds that AR is the future of remote assistance.

Wired explains how scale in VR can give a new perspective on theoretical physics.

7) Not Sure If You Want To Have A Baby? Try Procreating In VR First

Becoming a new parent is one of the few things more frightening than being seen in a VR headset.

8) Oculus Founder Plots a Comeback With a Virtual Border Wall

9) Breaking Bad VR Experience In The Works With Sony Pictures, Creator And Playstation

SIEA President tells Polygon of ‘TV’ ambitions in an interview.