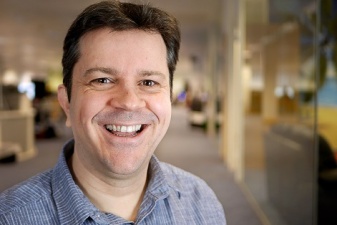 Patrick O’Luanaigh, CEO at nDreams is one of 50 world-class VR, AR and MR speakers appearing at XR Connects London on the 22nd and 23rd January. To hear him speak in person, book your ticket now!

A: I run nDreams, one of the leading VR developers and publishers. We develop and publish VR games, and have already launched eight VR titles. We focus primarily on high-end headsets like the PlayStation VR, Rift and Vive, but also develop for mobile VR, AR and MR headsets. We currently have just under 70 people working at the company.

A: VR offers a completely new way to play games, experience entertainment and interact with other people. Great VR is phenomenal, generates powerful emotions and delivers incredible immersion. I defy anyone to try something like The VOID: Secrets of The Empire, and not be blown away by the potential of VR.

VR also has enormous potential and will ultimately take over from mobile devices for mass-market computing. I believe we’re on a journey which ends with lightweight glasses that combine VR and AR into one wireless unit owned by billions of people. That’s exciting!

A: We’re seeing VR continue to grow at a sensible pace. In particular, we’ve seen PlayStation VR perform really well since Black Friday, and the price drops of both Rift and Vive have significantly boosted their install base.

But it’s still early days. AR is in its infancy and feels like it’s a couple of years behind VR; it has yet to deliver.

A: I’m very excited about two headsets. One is the Oculus Santa Cruz, which for me is the first ‘real’ VR headset - it’s self-contained, wireless, with full 6DOF inside-out tracking and hand tracking.

Once headsets like the Santa Cruz hit a price point of $200 or less, VR starts to get really interesting. I’m also very excited to see the Magic Leap One, which should kickstart the AR revolution.

A: Listening to some of the talks and catching up with lots of smart people who are responsible for pushing VR and AR forwards.

Don’t miss your chance to hear O’Luanaigh share his thoughts on why VR and eSports are the perfect match at XR Connects London. His session is at 11:20 on Monday 22nd January. Book your ticket now!

Patrick O'Luanaigh is the founder and CEO of nDreams Ltd, a fast-growing independent games developer and publisher focused on VR games and experiences.

O'Luanaigh has over 20 years’ experience within the gaming industry, having previously held senior positions at Codemasters including Head of External Development and Acquisitions, signing and producing titles such as the Music/MTV series and Operation Flashpoint.

From 2000 to 2006, O'Luanaigh was Creative Director at Eidos/SCi, where he was responsible for game design, gameplay and overall quality on all titles, including Tomb Raider: Legend, Hitman: Blood Money, Just Cause and Conflict: Desert Storm.

Having founded nDreams in late 2006, O'Luanaigh has grown the company from a one-man team to one of the world’s leading VR specialists with over 60 full-time studio staff. Patrick is on the BAFTA VR executive committee, and writes and produces music in his spare time.