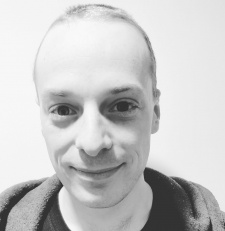 Marty Green, Game Programmer at Coatsink is one of 50 world-class VR, AR and MR speakers appearing at XR Connects London on the 22nd and 23rd January. To hear him speak in person, book your ticket now!

A: Gameplay programming for VR games and porting games to different consoles.

A: Roomscale mobile VR - it’s going to take off in a big way and allow for amazing new experiences.

A: VR is advancing very rapidly with new hardware from Oculus and HTC. Plus AR is getting a big push on mobile with Apple and Android having their own standardised APIs.

A: Talking to other industry leaders about the latest advancements in mobile VR.

Don’t miss your chance to hear Green share his insights on optimising for Samsung Gear VR with Unity at XR Connects London. His session is at 11:00 on Tuesday 23rd January. Book your ticket now!

Marty Green started his VR career working on Esper 2 for Gear VR. In his free time he developed a range of prototypes for room scale VR for the HTC vive. This led to some new innovative experiences that have transitioned to other games. Currently he works on console porting alongside working on Gear VR titles.