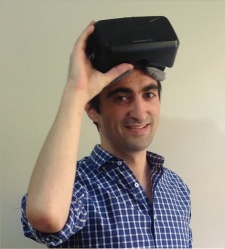 Sami Hamid, VR Producer at Glitch Studios is one of 50 world-class VR, AR and MR speakers appearing at XR Connects London on the 22nd and 23rd January. To hear him speak in person, book your ticket now!

A: I have been in the Virtual Reality space since early 2015, producing VR applications using early hardware development kits, as well as working with an indie VR production team consisting of developers, designers and 3D artists.

In 2016. I co-founded Glitch Studios, an immersive marketing agency developing VR and AR projects for clients across Europe.

I am also the director and mentor at the Virtual Reality lab, VR1, in Bahcesehir University in Istanbul, a Crytek led incubation initiative mentoring grass root VR projects and teams to learn and experiment with this emerging technology.

A: My inner child runs off with an imagined future world where Augmented Reality permeates all aspect of our real world just as social media does today, while Virtual Reality offers us a way to escape and plug into an alter ego life we play out in a metaverse online.

But coming back down to Earth, I can say that I strongly believe there are a plethora of real industry needs that VR and AR will begin to fill as the technology, and those developing for it, continue to grow and evolve.

We are still in the early stages of the industry and the fragments of quantative data out there suggests VR will have a strong impact in certain sectors including marketing, sales and education.

A: As per my presentation, VR and AR have had a slower than expected start since releasing their first gen consumer products over 2016. A lot of developers, indie teams and start-ups have clamoured to get onto the VR and AR boat, expecting the technology to be embraced by the general public and a proper marketplace for their services and products to emerge.

That hasn’t really happened yet and although we are definitely moving in the right direction, there is this long march through quite a barren market that a lot of cash-strapped start-ups are having to navigate.

There is hope on the horizon, but the smaller players need to be smart how they keep afloat while the market matures. I am a firm believer that is just a matter of ‘when’.

A: This is a real tough one; it’s like trying to peg the price of Bitcoin by August 2018 – it’s anyone’s guess!

From a hardware perspective, we can expect to see wireless and higher resolutions HMDs become the norm for VR. Oculus Go and other inside-out tracking 3DoF systems at reasonable price points will push higher adoption rates, while media hype around films like Ready Player One will help fuel renewed interested in the tech.

Mobile based AR will lead the pack in the AR industry as ARCore and ARKit move into consumer hands, though right now it still looks at risk of falling into the gimmicky/novelty bin unless some real-use case apps emerge over the year.

Magic Leap and higher end AR will be exciting to follow, but will most likely remain far from industry hands - and even further from consumer hands - until we are closer to 2020.

A: It’s really important to connect with others in the industry, understand who is working on what, touch base with talent that we can reach out to at Glitch for our own productions and keep an ear to the ground as to what’s bubbling in VR and AR. XR Connects is a great place to find all these things.

Don’t miss your chance to hear Hamid share his insights on how to survive as a VR and AR start-up at XR Connects London.

His presentation will encompass that, despite a promising future, VR and AR have seen a slower than expected consumer uptake in the last 18 months, making entering or surviving the sector as an indie developer, production studio or agency a difficult long-term game that is claiming its toll of failed start-ups along the way.

Hamid’s talk will touch upon the lessons learnt from Glitch Studios, a VR and AR immersive agency with offices in London, Oslo & Istanbul, uncovering some of the myths around the industry and some of the pitfalls that can be avoided to maximise your success as we hold our breath for mass consumer adoption.

His XR Connects London session is at 10:40 on Monday 22nd January. Book your ticket now!