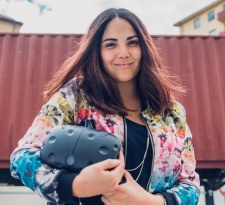 Faviana Vangelius, CEO and co-founder at SVRVIVE Studios is one of 50 world-class speakers appearing at VR Connects San Francisco 2017 on the 27th and 28th June. To hear Vangelius speak in person, book your ticket now!

Q: What do you do?
A: I am the CEO and co-founder at SVRVIVE Studios, a VR games studio based in Stockholm, Sweden. We are currently 15 employees and working on our upcoming VR title, Kartong: Death by Cardboard!, for the HTC Vive, Oculus Rift and PS VR.

A: It’s the ability to experience different worlds outside this world. The immersiveness is unique, and you can be inside the game or experience. That’s completely different compared to watching something on a flat screen. You can experience things as if you were there, and the brain perceives it as real. That to me, shows the immense potential of this new medium.

Q: What are your thoughts on the way the VR industry has grown in the last 12 months?
A: It has been taking off like a rocket ship in terms of how quickly the technology is being developed. When we started SVRVIVE Studios, our strategy was to move quickly because of the speed of the entire market, but the way this industry is developing even exceeds our expectations. We’re seeing more headsets, more advanced technology, and more immersive content coming out almost on a daily basis now.

Q: What major trends do you predict for VR in 2017?
A: Everything from haptic clothing to more Mixed Reality, where AR and VR comes together. I also see mobile VR becoming more immersive and premium VR coming down in price rapidly. Overall, I think 2017 will be the year when we set some standards for the industry, which will then lead us into 2018 where I expect the real mass-market growth to come.

Q: Which part of VR Connects/PGC San Francisco are you most looking forward to and why?
A: Meeting all the other industry professionals, learning from all the keynotes, and being inspired by all the new content.

Don’t miss your chance to hear Vangelius share her insights on today’s VR landscape, including learnings from SVRVIVE Studios and the team’s own experience of how to enter the VR market, why choose VR itself, and thoughts on imagination (stories), exploration (worlds) and emotions (immersion) at VR Connects San Francisco. Her session is at 13:55 on the 28th June 2017. Book your ticket now!

About The Speaker
Faviana Vangelius is a VR entrepreneur, speaker and gamer. She is the CEO & co-founder at SVRVIVE Studios – one of Europe's leading VR games studios, and she is also moderator of WIVR – Women In VR.

About VR Connects San Francisco 2017
More than 500 delegates from the VR, AR and MR industry will gather at San Francisco venue Bespoke on the 27th and 28th June 2017 for the first ever VR Connects San Francisco. Over the two days of the event, there will be 50 expert speakers addressing the key issues for the VR, AR and MR industry, from global trends and new tech to monetisation. Tickets are selling fast, so don’t miss out – get yours now!