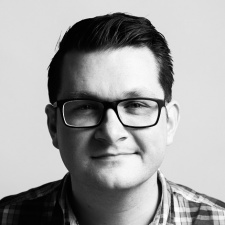 Solomon Rogers, CEO and Founder of REWIND is one of 60 world-class speakers appearing at VR Connects London 2017 on the 16-17th January 2017. To hear Rogers speak in person, book your ticket now!

Q: What do you do?
A: I founded REWIND, an immersive content agency, in 2011 after growing demands for my professional work pulled me away from 15 years as a University Senior Lecturer in Digital Animation, Visual Effects & Emerging Technology.
I have grown REWIND into an industry award winning tribe of vibrant creative technologists and digital artists. Focused on harnessing immersive technologies to deliver groundbreaking VR, AR and MR projects for some of the world's largest companies and brands.
In the past 12 months, REWIND has worked with the BBC, NBC, Nike, Sony, Red Bull, Rolls-Royce, Björk, Jaguar and many more. The team has also been working closely as an approved content provider for Oculus (Rift), HTC (Vive), Samsung (Gear VR) and FOVE, plus building release VR demos for Autodesk, AMD and The Foundry.
I co-founded the non-profit initiative VRTogether.org, designed to create VR for good, and founded the UK's most popular VR meetup, VRLO. In addition to my work at REWIND, I evangelise about VR and immersive technology all over the world, talking at conferences and events. I’m incredibly proud to say I love what I do!

Q: What makes you most excited for VR as whole?
A: Virtual Reality can change what a person sees, how they think, what they feel and even how someone behaves, in part because we believe it to be ‘reality’. It’s a powerful new medium and we are only beginning to unlock its potential.
VR also offers an amazing new marketing opportunity for brands: users aren’t just passively consuming a message, they’re participating in a brand experience. How a customer experiences a brand is becoming synonymous with how they perceive the brand, and perception is ultimately what drives today’s market.
In terms of an experience that can transport someone in a completely unique new way, there is nothing like this. It's an opportunity to put consumers inside your brand. It's the next generation of storytelling. Plus there is an inherent power in putting users at the centre of the action, letting them experience what’s happening on their own terms leads to more engagement, even empathy.
Brands are starting to realise this and they are thinking of VR as more than a gimmick; they are embracing the unique type of experience it offers and reaping the benefits of utilising this powerful media to tell their latest stories and launch their latest products. The phrase ‘the medium is the message’ has never been more relevant.

Q: What are your thoughts on the way the VR industry has grown in the last 12 months?
A: 2016 was an explosive year for the fledgling industry. We’ve had major hardware releases from some of the largest and most influential companies in the tech world; a VR presence at all the major tech and creative expos; Virtual Reality head-mounted displays (HMDs) being sold on the high street, advertised in magazines and on cereal box promotions; appearances on TV shows - including The Apprentice; and there’s even a Donald Trump VR sim! Virtual Reality has never before enjoyed such mainstream acceptance and awareness.

Q: What major trends do you predict for VR in 2017?
A: One of the major areas where I expect to see growth next year is in eye-tracking technology. Palmer Luckey has said it's a, “Critical part” of the future of VR technology and I couldn’t agree more. It will fundamentally improve the user experience through intuitive user input, secure authentication, improved graphics, and expressive social interaction.
Take for example, Project Falcon, a AAA quality launch day demo we created for the FOVE 0 headset. This on-the-rails shooter takes full advantage of the smoothness of the eye-tracking software in the HMD while using ‘foveated rendering’; a technique that will become increasingly important for creating impressive VR content that runs efficiently. Aside from simply allowing users to shoot rockets and lasers out their eyes - which is awesome whichever way you look at it! - eye-tracking technology will be used to bring new levels of immersion to VR experiences. By implementing this, developers can add new depths to AI characters and NPCs (non-playable characters) in their content. Imagine a character who can respond to you based on where your eyes are looking. This will be an incredibly powerful addition to a developer’s toolkit!
Continuing with additions that will enhance the Virtual Reality experience, we’re also going to see a huge increase in new peripherals for existing VR hardware. Valve opened up their Vive tracking technology to developers in 2016, and this will certainly lead to third party controllers, headsets and other add-ons coming to market. Soon we’ll be able to buy controllers that track our fingers, provide a realistic feel for various weapons, and even allow us to track our lower limbs for a completely immersive experience!

On top of all this, here’s my top five predictions for 2017 and beyond:

1. We will either hear rumours or get a reveal about the next generation of PC VR hardware including higher per-eye resolution and expanded field of view
2. Built-in headphones will become the norm
3. We will see prominent mobile devices with 4K screens making for very high resolution mobile VR
4. APPLE changing the game… bringing a robust AR/VR/MR proposition to the market
5. Within entertainment, we’ll see announcements of lots of VR add ons, rather than whole games/TV shows/films being made in VR

Q: Which part of VR Connects/PGC London are you most looking forward to and why?
A: The best part of all of the conferences I attend is getting to present to enthusiastic attendees and spread the good word of VR. People often don't realise just how versatile VR can be and what can be achieved using bleeding edge technology. I love being able to show people the ‘future’ - and demonstrate that the future is now!

Don’t miss your chance to hear Rogers’ deliver his keynote on future visions at VR Connects London, at 16:20 on the 17th January 2017. Book your ticket now!

About The Speaker
Solomon Rogers is the Founder and CEO of REWIND, the VR content studio behind international award winning work such as the BBC's Home: A VR Spacewalk, Björk's NotGet VR, Red Bull Air Race VR and the acclaimed launch title Project Falcon for the FOVE eye-tracking VR headset.
Solomon was a University of Hertfordshire Senior Lecturer for 15 years in Digital Animation, VFX & Emerging Technology, writing four Degrees, two Masters and supervising PHDs during his time there.
He is a BAFTA VR Advisory Group Executive, an advisor and board member to globally recognised conferences including Autodesk University, FMX.de, Develop:VR, MIPCOM and MIPTV. Solomon also co-founded the nonprofit initiative VRTogether.org, designed to create VR for good, and founded the UK's most popular VR meetup, VRLO.
Sol was recognised as one of the digital industry’s brightest stars in the BIMA HOT 100 in 2016, and is a well known and respected VR evangelist and prominent international keynote speaker, often quoted in press and on TV.