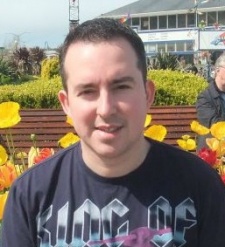 Simon Barratt, Director at Barog Game Labs  is one of 60 world-class speakers appearing at VR Connects London 2017 on the 16-17th January 2017. To hear Barratt speak in person, book your ticket now!

Q: What do you do?
A: We’re working on three Social VR games for PC, PS4 and high-end mobile VR devices. So far we’ve only teased one of the games which is currently known as ‘Dungeon Raiders’ an MORPG designed from the ground-up for Social VR! I wear many hats (and headsets!) in the company performing business development, leading design - and also coding when I get chance!

Q: What makes you most excited for VR as whole?
A: I’ve long been a fan of VR having owned a couple of pairs of Virtual IO i-glasses way back in the mid 90s and experimenting with VR development with them! When the Oculus Kickstarter came out and I met with Palmer Luckey and Nate Mitchell at Gamescom 2012, I realised the opportunity to work with VR seriously had arrived. The rate of development even since then has been incredible not only in hardware terms, but in the way that software and design solutions are being created whether it’s regarding locomotion, immersion or rendering speed. That thirst and constant drive for solutions is what really excites me and it’s great to be part of it.

Q: What major trends do you predict for VR in 2017?
A: I think with some more price competitive headsets coming onto the market, we’ll see a bit of concern about fragmentation but then resulting from that, larger headset penetration into the market and with that, larger software sales. I’m very positive about how things will be looking by the end of 2017.

Q: Which part of VR Connects/PGC London are you most looking forward to and why?
A: There look to be some great talks on both sides of the events, but ultimately the networking with a great set of speakers and attendees is what makes it a must-visit!

Don’t miss your chance to hear Barratt as he discusses overcoming VR design challenges at VR Connects London, at 16:00 on the 16th January 2017. Book your ticket now!

About The Speaker
Simon joined the industry in 1999 initially as a programmer. In 2005, he co-founded Four Door Lemon a successful work-for-hire studio that later moved into original title development with titles such as 101 Ways To Die, QuizQuizQuiz and a series of AR games for the PlayStation Vita. In late 2014, he founded Barog Game Labs to provide consultancy services and since mid-2016, the development of a series of Social VR games. As well as his development work, Simon is a board member of trade association Ukie, advisor to the School of Computing at the University of Leeds, Ambassador for charity SpecialEffect and founder of GameMakers, a co-working space based in Leeds.