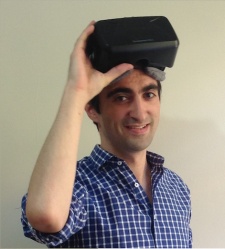 Sami Hamid, VR Lab Director at VRFirst – BAU, is one of 60 world-class speakers appearing at VR Connects London 2017 on the 16-17th January 2017. To hear Hamid speak in person, book your ticket now!

A: As the lab director for VRFirst BAU, one of 26 VR incubation labs around the world under the VRFirst umbrella, I am responsible for incubating grass root talent from indie teams to students. We help this aspiring talent in building out their VR projects from concept through to delivery in whatever field they might be focusing on; gaming, training, education, academic research etc.

A: For me, VR represents a spearhead in our drive to use technology to improve the human condition. VR could potentially bring us closer together while augmenting our realities in a wide spectrum of industries, helping redefine the way we work, play and learn.

A: VR as an industry has had a good start over the last 12 months. Many touted 2016 as the ‘Year of VR’ but really it was the ‘Start of VR’. And as a start, we saw the release of a plethora of high-end PC headsets and mobile headsets, input solutions and software platforms. The infrastructure is taking shape nicely, now lets hope it all ties together over 2017.

A: From a hardware perspective, over 2017 we will see improvements to the headsets including eye tracking, wireless HMDs and more innovative input solutions to PC VR, while mobile VR will see newly released phones, like Google Pixel, be VR ready out of the box. From a consumer and social uptake perspective, I believe 2017 will see a mixed bag of positive as well as negative news, articles and coverage. But from whatever perspective, it will be undeniable that VR will continue to make strides into main stream consumer news. From an industry adoption perspective, I feel VR will start to make serious inroads into education, marketing and branding and of course we will start to see a wide spectrum of AAA games released.

Don’t miss your chance to hear Hamid’s session at VR Connects London, where he will be taking part in a panel discussion on preparing the next generation of VR developers and designers through grass root VR incubation and support platforms. The panel session takes place at 12:40 on the 16th January 2017. Book your ticket now!

Sami is an experienced international project manager who has over 10 years of project management under his belt. His adventures have seen him in critical roles in projects including the 2012 London Olympics and Paralympics and 2010 Shanghai World Exposition. Sami has been in the Virtual Reality industry since early 2015, producing both small and large scale projects using early hardware development kits while creating and managing a VR production team consisting of developers, designers and 3D artists. Apart from co-founding Glitch Studios, Sami is also the Virtual Reality Lab Director for VR1, a Crytek led incubation initiative mentoring grass root VR projects & teams to learn and experiment with this emerging technology. He is also a VR Evangelist organising and attending VR community events and conferences around Europe and Turkey. Sami is a gamer at heart, having spent much of his youth immersed in video games of all genres. He is a self-taught programmer and enjoys developing indie VR projects in his spare time. He believes videogame mechanics and game architecture are fundamental building blocks in the creation of compelling and unique virtual reality experiences.