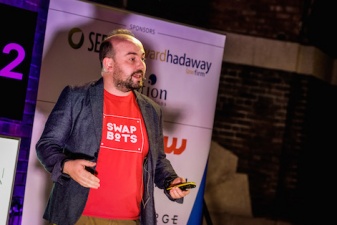 Phil Charnock, PR and Comms at SwapBots is one of 60 world-class speakers appearing at VR Connects London 2017 on the 16-17th January 2017. To hear Charnock speak in person, book your ticket now!

A: I communicate what makes SwapBots and immersive technology as a whole so exciting.

A: Immersive technology has the potential to be the next culture shift in technology.

A: 2016 has been a watershed year for both VR and AR. From the VR perspective we’ve seen mainstream headsets on sale for the first time, while AR has well and truly infiltrated popular culture. At the start of the year, I had to explain what this technology was; now everybody knows.

A: Mixed reality will slowly become the focus of the industry; it offers the incredible immersion of VR with the accessibility and flexibility of AR. Don’t expect MR to hit the mainstream just yet, although the seeds have been sown with the likes of HoloLens and Occipital’s Bridge.

A: Trying the latest software and hardware, plus the opportunity to speak with the passionate creators behind them.

Phil Charnock is the marketing and communications chief for SwapBots - the toy that is brought to life with the magic of augmented reality. An advocate for new technology, particularly the emerging platforms of AR and VR, he is a firm believer that we are on the cusp of a new age of technology that puts the user deep into the heart of the digital experience.