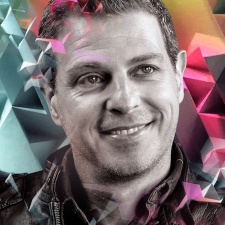 Dean Johnson, Head of Innovation at creative company, Brandwidth, is one of 60 world-class speakers appearing at VR Connects London 2017 on the 16-17th January 2017. To hear Johnson speak in person, book your ticket now!

A: I spend a lot of my time waving my arms around. That’s a throwback to my days as a Creative Director, where I used to creatively direct a team of designers with comments such as, “Make it bigger. Move it to the left a bit. Red, add some red!” Now my arm waving is to demonstrate a passion and vision for the future, usually on conference stages, in boardrooms and in front cameras around the world.

I work across the Brandwidth business teams to highlight future technology from our start-up and global tech partners and how our brand clients can capitalise on this. Designing the future is much more fun than answering a hand-me-down creative brief; it’s about the creative application of industry insight – not fanciful guesswork!

A: Of all the platforms and technology I’ve had the pleasure (or misfortune) of working with in more than 30 years in design, tech and publishing, VR really excites me. It appeals to the rebel in me, as I don’t like being constrained by technological limitations such as resolution, processing speed and plugins. VR allows us to be creative beyond anything else – the only boundaries being good ol’ time and budget. And motion sickness...

A: Looking inwards, which the industry is sadly guilty of, we’ve built on early developer edition headsets with real consumer contenders. Unfortunately, the high-end market (Vive & Rift) still feels elitist as they demand such a financial commitment from consumers. Samsung and Google continue to do good work to democratise the industry and get handsets on heads, even if I was left distinctly underwhelmed by Google Daydream View.

A: The next 12 months is when the conversation moves from ‘experts’ to consumers (and mainstream press) and they have real opinions, rather than the inwardly-focused conversation we’ve been having for the last three years. VR will begin to prove its worth in education. The music business will deliver a killer app and 2017 finally heralds the dawn of the VR sex robot. The future’s bright, if slightly sticky.

Don’t miss your chance to hear Dean Johnson’s Superstar Session at VR Connects London, where he will be discussing Multiple Realities: Where the REAL Storytelling Happens, at 09:40 on 16th January 2017. Book your ticket now!

As an accomplished design leader, writer, presenter, BBC tech pundit and Head of Innovation at Brandwidth, Dean Johnson is shaping the connected future for film, TV, automotive, publishing, music, education and leisure sectors with the emphasis on user experience and engagement. Dean is a Fellow and former VP of the Chartered Society of Designers and a Mentor for the British Fashion Council.

As the co-host of #StereocastVR, Dean is also pushing Virtual Reality boundaries further than ever before with the world’s first full live-action VR series, taking the audience into the action alongside the guests, live music and experiences. Dean writes for numerous publications, his own blog, www.activrightbrain.com, and is the author of international #1 interactive iBook, ‘Digital Publishing: The Next Steps’.