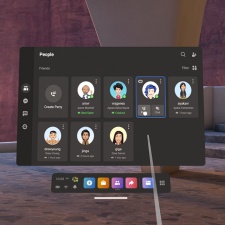 Oculus has revealed the upgrades coming with software update v32, including changes to Oculus Move, improvements to the App Gifting process and more. The update has already started rolling out and will be extended to further users soon.

The first improvement is to the fitness tracker Oculus Move, which reports activity and calories burned. Users can now set how many days per week they intend to work out, with the option to change daily goals to weekly. Calorie goals and Move Minutes are also now more attainable at the start of a new regime of exercise.

Another new introduction is the ability to gift apps to other users from within VR, without resorting to using your desktop or mobile. As long as you can remember their email address…

Lastly, the Files App gets an update so users can automatically sync their saved media files directly to the Oculus mobile app without taking off the headset.

A blog post on the Oculus site reminds users that, 'As always, v32 will roll out gradually to all Quest and Quest 2 headsets, so please be patient if you don’t see the update today! We’ll have it out to you as soon as possible.'