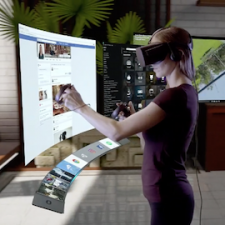 The way that users interact with and navigate in Rift is about to change drastically, as revealed by Head of Rift, Nate Mitchell at Oculus Connect 4.

Introducing Core 2.0, he revealed that the Universal and Oculus home menus have been redesigned for use with Touch in Oculus Dash. With the new Dash, users will be able to swipe to scroll and tap to select, which will streamline complex actions.

The interface can be brought up as a 3D overlay any time, enabling users to access desktop apps from inside VR and offering infinite workspace that Mitchell suggested could, “Replace traditional monitors entirely”. In his words this is, “A total game-changer”.

The system is being built using React VR and is ‘super-extensible’ as Mitchell explained that, “We use Dash with Visual Studio to debug Dash from within Dash - this is ground-breaking tech you won’t find anywhere else!”

With Dash adopting much of Home’s functionality, Home itself is “Freed up to be more personal”. Reminding us of Alex Kipman’s WMR Cliff House demo from the Microsoft special event earlier this month, Rift users will be able to create and design their own space using Home.

Items will include furniture, toys and art, as well as the chance to display achievements for friends to visit and view. Since it’s designed to be a persistent space, you’ll be able to visit friends’ Homes to leave them notes to read when they next log in.

Core 2.0 will be available in Beta from December as a free update.