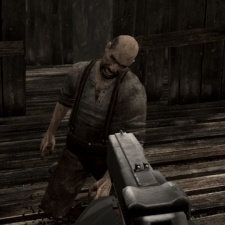 The hotly anticipated release of Resident Evil 4 VR is nearly upon us, but the conversation surrounding it has soured of late. Instead of trumpeting the top-down remake for virtual reality - including the transition to first person - leaks regarding content cuts have been placed front and centre.

Facebook is reported to have demanded that content that may be considered sexist must be cut from for this Oculus Quest 2 exclusive remake of the 2005 Capcom classic. Information about the changes was first published by Peter Pischke on The Happy Warrior, under the title 'EXCLUSIVE: Capcom allows Facebook to Deface & Modify Resident Evil 4 for Oculus VR Remake'. Exclamatory tone aside, Pishke's article is detailed, citing unnamed sources and well worth a read. The claims haven't been substantiated, but a video showing the changes seems credible.

The article quotes the English translation of this Japanese development video saying that any content that is specifically related to, "Sexual harassment, sarcastic expressions, sexist conversations, and expressions that may be indirectly linked to them have been removed." It is interesting to note that, "These were not unavoidably removed as part of the translation or porting process, but were done by Armature Studio at the request of OculusVR and with the approval of CAPCOM."

Armature Studio is developing the VR game in cooperation with Capcom, and Oculus Studios as publisher. Pischke later adds that, "According to my sources, the vandalism came at the request of Oculus’s owner, Facebook".

With words like 'censorship', 'deface', 'vandalism' and 'woke' throughout the article, you won't be surprised to hear the voices on the internet have echoed its cries of foul play.

Reddit user The91stGreekToe makes the observation that, "Beheadings = okay. Flirting = bad." while ShimpsyDwixen says that, "Social media companies are the overreacting christian parents of this generation." We were particularly amused by Deep_Menu_524's novel verbiage, claiming that we've all been, "Zuckerf*cked".

For what it's worth, we also 'learned' from the comments that gaming is better on a tablet than in VR and that we're doomed when the aliens invade….

The world of 2021 is not the same as it was in 2005. Since the original game's release, we've had Gamergate and the much wider #MeToo movement calling out the treatment of women in games themselves, the games industry specifically and society in general.

It's entirely possible that there are other, further-reaching changes to the game, but based on the information provided, it just sounds like Facebook asked to cut some cringeworthy dialogue that was dubious when first released and regrettable from a responsible publisher today.

And since Oculus - owned by Facebook - is acting as publisher for this VR remake, then they get to call the shots. Is it really any different to record labels forcing bands to put out specific songs as singles, or movie studios insisting on entirely changing the ending of a film?

This release was never intended as video game conservation - that's what retro hardware and emulators are for. Instead, it's an opportunity to experience the much-lauded gameplay in a visceral new medium and introduce a new generation to the franchise.