Is Valve planning to beam lasers into our eyes for VR? 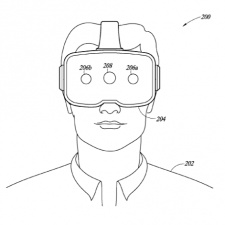 Valve had a busy day yesterday, with no fewer than 10 patents published in the same day! You might think such a high number would suggest a reimagining of its hardware, but they all seem to be based around a single subject: polarisation - and specifically the compensation, correction and multiplexing thereof.

I'll hope you're better informed about polarisation than me, dear reader, but for anyone catching up on the subject, it's a method of presenting stereoscopic moving images. The left and right eyes are served slightly different images, which present the illusion of a stereo 'world'. Think of those old red and green 3D glasses as a really basic precursor to how it's used in VR.

Back to the patents in question and they seem to focus on - apologies for the pun - various ways of improving efficiency and performance of polarisation. We could get our heads around diffraction, wide grids, and spatial and time variances, but we have to concede we started to get a headache around the mention of something called a 'multi-twist retarder' and had a cup of tea instead.

The patents most often refer to a micro-display, but there were also several passages including, 'The display light source may include a laser light source, and the display system may further include a scan mirror positioned to receive a light beam from the laser light source and to relay the received light toward the pupil relay system'. One patent even goes so far as to include 'scan beam systems' in its title.

Is Valve working on something similar to Magic Leap's Digital Lightfield, that projects images directly into the eye, rather than onto a separate screen as do most VR headsets?

Welcome to the world of patents, where it can be a bit of an intellectual land grab and amount to little more than sabre rattling, but even though the Bellevue co seems to have no intention of implementing this technology for consumers any time soon, we wouldn't be surprised one bit if Valve had at least looked into - groan! - beaming lasers directly into our eyes.