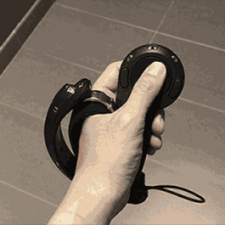 Valve has started sending prototypes of its next generation VR controllers to developers as it seeks feedback ahead of finalising the design. The Vive creators say they are only manufacturing this version in limited numbers, but the design looks to be nearing production.

We got our first look at the second generation controller at Steam Dev Days in October last year, and the hardware has progressed from an early prototype to its current form factor in the eight months since.

Now called Knuckles, the controllers have capacitive sensors that detect movements and gestures from the user’s hand and fingers, as well as different grip types. The key functionality that differentiates the Knuckles from both the Vive’s existing wands and Oculus Touch is its ability to sense individual finger movements, enabling users to gesticulate in the virtual world in more detail than the Touch's thumbs-up or pointing. This could be used to communicate with in-game characters or other people, grab and drop objects or interact with interfaces with a far greater level of precision.

The palm grip means that users can fully open their hands without dropping the controller, but that could make it harder to take a drink in the real world, while the asymmetric design will make it easier to identify your primary controller.

The thumb has capacitive sensors in the physical buttons and trackpad, the index finger has a trigger sensor and the other fingers have sensors in the body of the device. Valve refers to these measurements as Cap Sense. Each sensor measures an independent binary curl value, which can be combined for a total input.

In The Middle Of Some Calibrations

These dev units need to be calibrated before use, but Valve tells us this is a temporary measure that won’t be required for the final consumer version. The hardware automatically recalibrates through use, allowing for changes in skin capacitance over time. The battery life is three hours.

The Knuckles controllers are currently only supported in SteamVR Beta.

Almost as exciting as the new controllers is the prospect of multiple, full-length VR games from Valve. In a Reddit Ask Me Anything in January, Gabe Newell said, “The big thing right now is broadening the range of options we have in creating experiences. We think investing in hardware will give us those options. The knuckles controller is being designed at the same time as we're designing our own VR games.”

We understand that Valve expects to ship Knuckles before the end of the year and we hope its release will be accompanied by the kind of experiences for which the studio has deservedly established its enviable reputation.