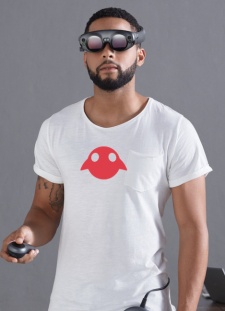 Florida-based AR start-up, Magic Leap, has been extremely secretive about where it’s spent investment that is now approaching $2bn. Now the company has unveiled Magic Leap One: Creator Edition, an AR package that aims to blend ‘lifelike digital objects’ with reality.

We had some idea of what Magic Leap’s project may look like - right down to the tri-factor of wearable HMD, separate processor and controller - and we even had advance warning the reveal was coming, but now we’ve had our first official look at the HoloLens rival that has excited the biggest investors into a spending frenzy.

The Magic Leap hardware consists of the three separate units we anticipated, but now we can put names to ‘faces’ - Lightwear (headset), Lightpack (power pack) and Control (controller), which have been engineered to offer lightweight (get it?) and comfortable usage for hours on end. The headset features display technology that focuses on allowing the user’s brain to naturally process digital objects the same way as real-world objects. This is achieved by Magic Leap’s Digital Lightfield, which uses photonics to generate digital light at varying depths to help digital and real appear seamless.

The first look at the hardware that was allowed to be shared with the public was granted to Glixel, Rolling Stone’s ‘video gaming destination’. The fact the Floridian firm chose such a rock ‘n roll outlet instead of a nerd-site to reveal its hardware speaks volumes about the impact it obviously thinks the technology will have on the world. It’s a great read and you should check it out if you have time – it runs long.

Rony Abovitz, long-term tease, famed founder and CEO of Magic Leap, describes digital lightfield as taking a system engineering view of the brain. Photonic lenses, which he calls ‘wafers’, move photons in the 3D nano-structure in a way that allows it to output a very particular signal. Those wafers eventually made their way into a larger, rounder lens, which is then built into a pair of goggles that any steampunk would be proud to wear.

Power Of Light
Abovitz explained the difference between Magic Leap’s approach compared to competitors at an eMerge Americas investor conference back in June, “What we’re doing is a new class of computing... Think of it as spatial and ambience where it’s contextually aware – it’s a totally different kind of experience... We’re using our digital light field to create a personal computer that’s always around you; always understanding.”

A robust sensor suite on Magic Leap One is used to detect surfaces, planes and objects, such as bumps or chairs, allowing for digital reconstruction of the user’s physical surroundings. In essence, this means that the Magic Leap One can see what the user can see, with the aim of lightfield objects not only appearing to be in the real world, but interacting with it, too.

The Lightwear glasses are intended to be worn as everyday glasses, according to Gary Natsume, VP of Design and UI at Magic Leap. He says, “The aspiration is that eventually, this will become like glasses and people will wear them every day.” Magic Leap plans to offer prescription lenses for glasses wearers.

Mobile Future
The Lightpack acts as a small computer that can be worn unobtrusively on the user’s waist, pocket or shoulder strap while they use the headset. Speaking to Brian Crecente, Abovitz said, “This is a self-contained computer… Think about something close to a MacBook Pro, or an Alienware PC. It’s got a powerful CPU and GPU. It’s got a drive, WiFi, all kinds of electronics, so it’s like a computer folded up onto itself.” A MacBook Pro the size of a lady’s compact mirror? That’s pretty impressive on its own. It’s also a neat workaround to remove the weight of computing hardware from the user’s head.

But the glasses aren’t just dumb displays. According to Abovitz, the computer power is divided between the hardware units, as the Lightwear goggles also contain a “powerful computer”, which senses the world and completes computer vision processing in real-time. This means the kit can be aware of the user’s surroundings at all times. With four built-in microphones and six outward-facing cameras, the pair of goggles is like a “satellite of engineering”.

Window Of Reality
It all sounds really exciting so far, but one major concern is the field of view. Rolling Stone’s coverage observed that, “The viewing space is about the size of a VHS tape held in front of your arms half extended.” That sounds less punitive than HoloLens’ notorious tunnel vision, but it’s a problem that makes the experience more like looking through a window into AR, rather than merging reality and AR.

Sam Miller, Senior Director of Systems Engineering said, “Our future gen hardware tech significantly expands the field of view… The field of view that you are looking at on these devices is the field of view this will ship with. For the next generation product, it will be significantly bigger.” That’s sure to be a worrying prospect for anyone planning to invest in this first iteration of the headset. This statement could be enough to persuade potential buyers to wait for the second model, despite being keen to get their hands on the new tech.

Living Room Firefight
Magic Leap is evidently keen to develop experiences alongside its breakthrough technology, as evidenced by its partnership with Weta Workshop, the special effects and prop company behind films such as The Lord of the Rings and Blade Runner 2049. The company’s newly established Weta Gameshop division is now working on its first title, an FPS to release alongside the hardware next year.

Commenting on the Magic Leap One Creator Edition, Menlo Park based AR/VR adviser Digi-Capital's Managing Director, Tim Merel said, “Rony Abovitz and the team’s ‘Creator Edition’ will give the world its first glimpse of Magic Leap's approach to lightfield display technology in 2018, showing what they’ve been able to deliver after years of hard work and massive investment. Lightfield is the star of the show, where Magic Leap joins other early players like Avegant. Magic Leap’s ‘Creator Portal’ will give developers the chance to experiment with the power of lightfield, leading to a flood of innovation around new use cases and UX.”

“The form-factor of Magic Leap One Creator Edition will be familiar to enterprise smartglasses users, but less so to mass-consumers used to wearing sunglasses. Similarly, the belt-worn ‘Lightpack’ for compute and battery enables a powerful platform with good battery life, but moves away from the simplicity of unitary devices like smartphones. The ‘Control’ 6 Degrees of Freedom (‘DOF’) input controller, a more powerful version of 3 DOF controllers bundled with Google Daydream View and Samsung Gear VR, also differs from HoloLens’ and Meta’s ‘Iron Man’ gesture control approach. This really does make the product a ‘Creator Edition’ in 2018, the first step on the roadmap to Magic Leap’s mass-consumer products in the 2019 to 2020 timeframe.”

The Magic Ignites...
We may have finally had our first look at the hardware’s long-hidden form factor, but we can't help feeling disappointed not to see the hardware in action in a demo video.

The Magic Leap One: Creator Edition is expected to launch in 2018 as a premium headset aimed at early adopters, enthusiasts and content creators. The company plans to release a Creator Portal, where developers and creators can access the Magic Leap SDK early next year. Magic Leap has yet to commit to a firm release date or price point.