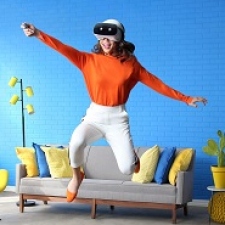 Lenovo launched what it claims to be the world’s first standalone Daydream VR headset at CES, the Mirage Solo with Daydream.

The new all-in-one headset features motion-tracking technology called WorldSense, on Google’s Daydream platform, powered by Qualcomm’s Snapdragon 835, with 4GB of RAM and a 110-degree field of view. With up to seven hours on a single charge,the Mirage Solo has also been tailored for comfort, with quick-release buttons for visor adjustments, adjustable dials and size accommodations for nearly every face shape, visual aid and head proportion.

Lenovo has engineered the headset for an even load distribution and balance to reduce strain on the wearer, as well as lining the areas that touch your face and forehead with breathable, insulated contoured padding for maximum comfort.

Navigation is via a standard wireless Daydream controller, with the familiar clickable trackpad, app and home buttons, and a volume rocker.

Also launched by Lenovo at CES is the Mirage Camera that enables users to capture their own 180-degree videos to watch back on the Mirage Solo, or share via YouTube and Google Photos.

The company says that launching the two products together, ‘Reaffirms our commitment to designing products that are different for the sake of being better. With their affordable price points, this VR duo brings innovative, new technologies such as WorldSense and VR180 to everyday users. More so, they simplify the VR experience with unexpectedly easy set-up and the ability to record, watch and share your own VR video. For users intimidated or unfamiliar with VR, they redefine expectations by delivering high-quality experiences and seamless consumption’.

The Lenovo Mirage Solo is expected to be available starting in the second quarter this year.