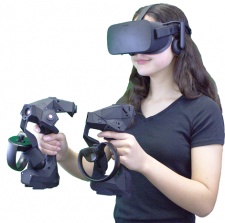 The reconfigurable controllers are designed to allow them to be used independently or to mate together in common interaction configurations, such as a steering wheel, gamepad, or machine-gun. Mechanical sockets on the controllers provide mate-points on each of the controllers to form semi-rigid couplings between the controllers that allow users to effortlessly maintain the mated poses. This allows users to transform interaction modes by acting out their intended action as opposed to clicking a button, so that they remain immersed in the VR experience.

As with their prior haptic controllers, the company’s unique brand of touch feedback is created by applying friction and shear forces through actuated plates on the surface of controller handle, which creates tactile illusions of inertia, elasticity, impact, etc, when these shear forces are applied in response to the user’s actions.

The company has also developed a new game experience called Colony Defense to highlight the capabilities of its new reconfigurable controllers. This game has the player defend a space colony against incoming waves of space insects. The game features both building and combat interaction as part of the game, similar in spirit to strategy games like Starcraft, but in contrast Colony Defense is first-person and hands-on.

For example, the CES gameplay begins only after the player mates their controllers to form a physics gun and assembles a gun turret. Once assembled, the player can reposition the turret with the physics gun using their right hand and/or use their left hand controls to fly through space with their jet pack.

Separating the player’s hands maintains the jet-pack controls in the player’s left hand, but the right hand now holds a blaster. A heavy blaster can be formed by mating the controllers in the fore-aft configuration. The CES Colony Defense demo is a work in progress, but demonstrates the potential of the reconfigurable controllers.