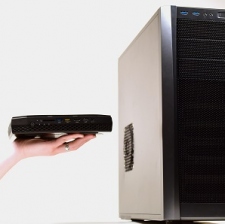 Intel launched what it claims to be the smallest Virtual Reality-capable system ever at this year’s CES. The new Intel NUC (formerly codenamed Hades Canyon) is based on the newly announced 8th Gen Intel Core i7 processorwith Radeon RX Vega M graphics in a tiny 1.2 liter system.

The new NUC will come in two versions:

Both NUCs include dual Thunderbolt 3 ports and dual Gigabit Ethernet ports. The system can drive six independent monitors simultaneously, with one HDMI port is on the front, making it easy to plug in a VR headset. These NUCs will be sold as bare-bones kits, targeted to DIYers who are looking for small, sleek and powerful mini PCs.

The units will be available starting this spring.