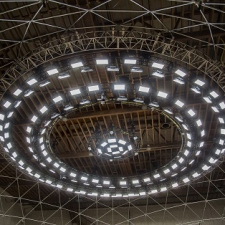 Intel Corporation announced the debut of Intel Studios at CES, a newly constructed, state-of-the-art facility dedicated to the production of large-scale, volumetric content for the next generation of immersive media.

Located in the heart of the entertainment industry in Los Angeles, Intel Studios features the world’s largest volumetric video stage and a comprehensive post-production and control facility powered by the latest technology from Intel.

The immersive media hub features a 10,000-square-foot dome for the capture of volumetric video, as used in Intel’s True View technology. The process begins with a camera array that captures height, width and depth data of all the action within a scene to produce voxels. That information renders a virtual environment in spectacular, multi-perspective 3D that enables users to experience a captured scene from any angle and perspective and can provide true Six-Degrees-of-Freedom in AR/VR experiences.

The studio sends captured volumetric content data over five miles of fiber cable to custom Intel-powered graphics workstations and servers with the ability to crunch over 1TB of data every 10 seconds.

Additionally, Intel Studios offers an end-to-end volumetric content production capabilities with pre/post-production, production, set design and visual effects capabilities available on-site. Content can be tailored for use across a variety of platforms including AR/VR HMDs, mobile apps, online and more.