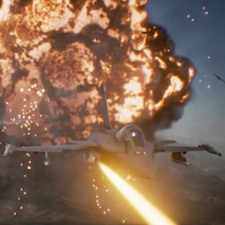 We’re still waiting on confirmation from Bandai Namco about the extent of PS VR gameplay in the forthcoming Ace Combat 7: Skies Unknown, but we couldn’t resist sharing this new trailer from E3. I mean... just look at it!

We’re promised an arsenal of ultra-modern and near-future super weapons for players to deploy, while presenting formidable enemies for pilots to vanquish in the air. The game returns once more to the Strangereal universe and marks the return of Sunao Katabuchi as the lead writer behind the fictional storyline that players will experience in the game. Previously, Katabuchi-san wrote the storylines for both Ace Combat 4: Shattered Skies and Ace Combat 5: The Unsung War.

We know that the campaign is not playable in VR, but that there are exclusive missions for PS VR. We look forward to finding out how many and how long they are. In the meantime, just feast your eyes on the new E3 trailer.