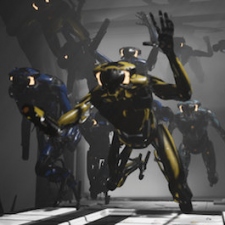 Already available on Rift and Vive, ROM: Extraction is headed to PS VR this year and is being shown at this year’s E3. Exclusive features are being developed for ROM’s PS VR outing, including new weapons, enemies, levels, and gameplay modes – but most importantly, another reason for us to dust off our Aim controller.

Developed by Californian studio, First Contact Entertainment, ROM: Extraction is a fast-paced homage to the classic arcade shooter - with a VR twist. Engage in an epic takedown of extraterrestrial robots by combining your futuristic weapons with your ability to slow down time.

Steam customer reviews largely praise the game’s polish, but lament its short playtime. We await with interest to see what First Contact can bring to the PlayStation table later this year.