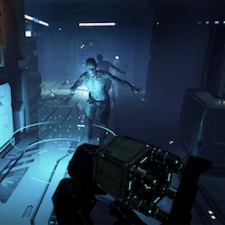 British developer, Firesprite has been demoing its forthcoming first-person stealth horror game, The Persistence, at E3 this week.

Exclusive to PS VR, the game is set on board a deep space scientific vessel called The Persistence. In the year 2521, the ship arrives at the site of a collapsing star 17,000 light years from earth. While conducting a major experiment, a horrific incident occurs mutating many of the crew. As The Persistence is pulled into the gravity of the collapsing star, the ship's computer, IRIS wakes remaining members of the crew from cryogenic sleep - one at a time - to save The Persistence. And the player is that one crewmember every time...

Designed specifically for VR, The Persistence is also procedurally generated. Every time you die, a new character is awoken by IRIS and the layout of the ship changes. Every life will play out differently, with different enemies to face, items to find and power-ups to collect. Survival requires you to be stealthy and hide, leaning around or peeking over cover.

While there’s no hope of help in-game after your faster than light journey, you might have more luck in the real world. The game will also have a companion app for phone or tablet, where friends can hack the ship’s computer to control doors, distract enemies and disable traps. Or they could draw swarms of enemies straight to your location...

The Liverpool studio’s previous credits include Run Sackboy! Run! and The Playroom. Speaking about the development process for PS VR, Stuart Tiley, Executive Game Director at Firesprite Games said, “There’s a whole new language of design and development,” and specifically, “The way you move has to be different. Movement speed, acceleration, camera shake, depth of field - there are so many new ways you need to work in order to make it work really well in VR”.

The Persistence is exclusive to PS VR, release date TBC.