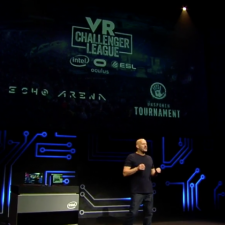 In the build-up to today’s PC Gaming Show Powered By Intel ahead of E3, Gregory Bryant, Senior Vice President of Intel Corporation took to the stage to share some VR news with us in a short warm-up show.

Intel has been thinking about VR eSports and how to make it, “Worthy of the gamers, pros and fans.” The CPU mega-corp wants to grow the user base and make sure that the pro players of the future are in the pipeline now.

Bryant introduced Ready At Dawn co-founder, Ru Weerasuriya, to talk about the VR multiplayer expansion to their forthcoming game, Lone Echo. Weerasuriya announced Echo Arena, a full-contact futuristic sport for up to 10 players who compete to land a disc into a goal in zero-gravity. If you’ve read the book or seen the movie of Ender’s Game, then you know what to expect.

Intel is sponsoring the free release of Echo Arena at launch on 20 July for all Oculus Rift users.

Bryant also announced that the VR Challenger League will kick off in July, featuring The Unspoken and Echo Arena played competitively, “Online and in events around the world,” culminating in a final in Poland, early 2018.

Intel, Oculus and ESL are sponsoring a Grand Slam tournament for the VR Challenger League, where the team that wins four of the 10 events will get a $1m bonus in addition to their usual tournament prizes.

There will be an open Beta starting 23 June.

The reveal of a VR destination for Linkin Park fans was greeted with a mild ripple of applause for the old nu-metal act. Developed using Spatialand, the destination will feature exclusive content for both Rift and Vive when it launches on 27th July to mark the start of their US tour.