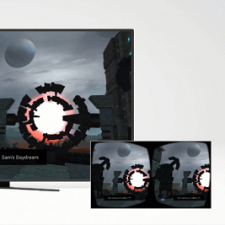 Following Google’s announcement at the Californian I/O 17 event that it will release a standalone Daydream VR headset later this year, they shared more details about what the future holds for VR and AR in the Daydream ecosystem.

For Google, Tango is a fundamental enabling technology for both VR and AR. WorldSense, the positional tracking technology which makes the new Daydream standalone VR headsets work without any external sensors, is derived from Tango.

There are more than 150 apps already available for Daydream and the upcoming 2.0 release for all headsets, Daydream Euphrates, has features that Google says will make VR more fun and easier to share with others. You’ll be able to capture what you’re seeing, as well as cast your virtual world right onto the screen in your living room. And, soon, you’ll be able to watch YouTube videos in VR with other people and share the experience in the same virtual space.

Instant Preview, enables developers to update their code on a computer and see the changes on a headset in seconds, not minutes, streamlining and accelerating development for Daydream VR.

Google has also developed Seurat, which makes it possible to render high-fidelity scenes on mobile VR headsets in real time. They claim that it will enable developers to ‘achieve desktop-level graphics or better with a mobile GPU’.

Building on its work in the WebVR standards, Google will release Chrome VR this summer, which will make it possible to browse the web in VR. And AR gets a look in too, with a work-in-progress build of Chromium. You can try it for yourself here.