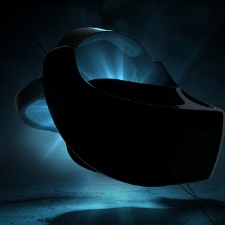 Google revealed at the I/O event yesterday that it is working with third party hardware manufacturers to produce a range of standalone headsets for the Daydream platform.

Clay Bavor, VP VR at Google, announced partnerships with Lenovo and HTC, who shared the first details of their forthcoming hardware with us. HTC Vive told us that they intend to deliver, “The most premium standalone headset and user experience.”

One of the obstacles to VR’s acceptance by the mainstream is the complexity of the systems, but HTC promises their Daydream headset, “Will be simple, easy-to-use and with no cables to connect. Just pick it up, put it on and be fully immersed in your new reality.”

We can see from the first product shot – even though it’s intentionally not lit to reveal detail – that the hardware features a rigid head mount system, more like HoloLens or PS VR than Vive. It appears from the shape that the processing unit is housed in the lens box. Although this will place more weight to the front of the face, the use of two straps should help distribute the load.

If you’re a developer and want to get involved with Vive’s standalone headset, you can register at developer.viveport.com.