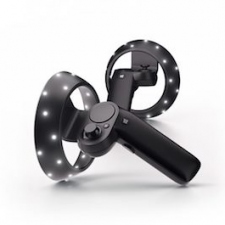 Microsoft revealed its all-new VR controllers today at Microsoft Build 2017. The pair of controllers matches the 6-degrees-of-freedom currently offered by existing PC VR hardware in the shape of HTC Vive wands and the Oculus Touch. In fact, the form factor takes clear inspiration from the Oculus peripheral to our eyes.

Instead of relying upon external base stations for tracking, however Microsoft’s controllers make use of the headset’s cameras. While this system requires no external hardware and will obviously be a lot easier to set up, Microsoft has not confirmed line-of-sight as a requirement, but we expect that to be the case and this could make certain gestures impossible to track.

Microsoft told us the controllers are built to hardware specs that are available for third parties to manufacture; just like their VR HMDs. As a result, we can expect to see a range of controller options with common functionality and differing form factors.

The controllers will be first be available as part of a bundle with Acer’s mixed reality headset [UPDATE - 'this holiday'] for $399; significantly cheaper than either Oculus or HTC’s hardware.

The controllers not only have analogue sticks, but also touchpads.

New pictures from the presentation: