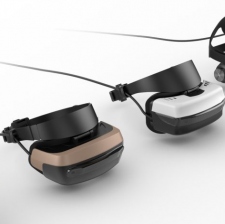 Microsoft announced a partnership with Chinese VR headset maker 3Glasses at today’s Windows Hardware Engineering Community event (WinHEC) in Shenzhen, China. The company plans to offer a Windows 10 headset in the first half of 2017 at the higher end of Microsoft specifications. Specs for the S1 headset include 2880 × 1440 with a refresh rate of up to 120 Hz, comparing favourably to the Rift and Vive’s 2160 x 1200 and 90 Hz.