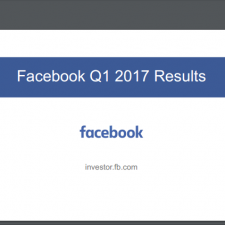 During his opening remarks in last week’s Facebook Q1 2017 Quarterly Earnings Call, CEO Mark Zuckerberg said, “Over the next 10 years, we're developing consumer use cases around technologies that are a big part of our future, but won't be a big part of the business for a while.”

He then referred to Facebook Spaces and Facebook 360, as well as Rift, Touch and Gear VR saying, “As we explore more things like augmented reality… we're going to keep investing aggressively in the infrastructure we need to grow and serve our community.”

The Future Is Coming

The purpose of this quarterly earnings call is to update investors and media about the company’s performance to 31st March. In stark contrast to the recent forward-looking F8 developer event, where VR and AR dominated the presentations, immersive media only briefly featured in this briefing on performance to date. Instead, key topics included ad revenue and user growth.

Zuckerberg’s comments in the earnings call reinforce his repeated suggestion that VR is on a 10-year roadmap that Facebook has only just started; as he – and every other speaker – reminded us at F8.

Following the earnings call, Zuckerberg posted on his Facebook page, “I'm excited to get virtual and augmented reality in more of your hands soon.”